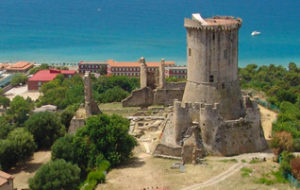 With the fall of Focea (city of Asia Minor) in the hands of the Persians, entire families of exiles headed for Marseilles, formerly a Focean colony, and towards Corsica (Alalia).
The presence of these valuable merchants and sailors in that strategic point of the Mediterranean, was a threat to Etruscans and Carthaginians, who allied themselves and attacked them with a fleet of 120 ships in front of Corsica.
The Focei had the best, but it was a battle conquered at a hard price, with the loss of forty of the sixty ships deployed in battle.
Remaining in Alalia would have been too dangerous, and therefore the Focei resumed the sea and, after a stop in Reggio Calabria, they climbed the coast, landing on a promontory of Enotria (the country of vineyards) ,where they created Elea, their famous city, today known with its Latin name Velia.

Two Greek colonies were allies of the Focei : Poseidonia and Reggio.
The city had two harbours, and this condition rendered it  particularly interesting from the point of view of trade with the Greeks and the Etruscans. There was a direct connection especially with Poseidonia.

Velia never fell into Lucan hands precisely by virtue of commercial agreements with these populations of Southern Italy.

The most illustrious fellow citizens of Elea were Zeno and Parmenides, remembered as profound thinkers.
The neutrality that characterized it, allowed the city a long and complete independence.
Allied of Rome since the time of the Punic wars, from 88 d.C. Velia became a Roman municipality.
Brutus had his base here during the war against Marc’Antonio and Ottaviano. Cicero speaks of it as a city which was still Greek by culture.
The teaching of Parmenides dates back to the foundation of a medical school that will be active and flourishing until 62 AD.

Its economic decline is attributable to the construction of commercial and military routes that connected Rome directly with the East, through the ports of Puglia.

Velia remained out of any traffic, meanwhile its harbourss were completely submerged by the flooding of the rivers of the plain.
The city was reduced to a small fishing village that was slowly abandoned, due to the arrival of malaria and pirate raids.
From the exiles, a small center was born called Novi Velia. All memory and location of the old city was lost until the last century.