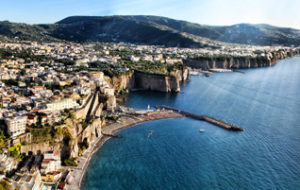 The name “Surrentum” probably derives from the sirens, mythological figures that attracted and enchanted the sailors with their songs.

Only Odysseus, warned by the sorceress Circe, managed to escape this fate: he had himself tied to the mast of the ship and imposed on his sailors some wax plugs to wear in their ears.

The area seems to have been inhabited since Neolithic and perhaps the city was founded by the Teleboi.

It was under the dominion of the Syracusans (474 ​​BC), the Samnites and then the Romans.

It was given to Hannibal in 216 BC. and it was also a rebel city in Rome’s civil war. Reconquered by Silla, it hosted a colony of veterans.

At the beginning of the Empire, it became a holiday resort like the Phlegraean camps. Episcopal seat since 420, it passed to the Byzantines in 552.

The city resisted various Longobard and Saracen attacks, also thanks to the miraculous intervention by Sant’Antonino. Towards the end of the tenth century it was independent but in 1039 Guaimario V prince of Salerno took possession of it and established a semi-independent dukedom.

In 1133 it was conquered by Roger the Norman to whom the city rebelled with the help of the Pisans.
Resumed by the Normans and subjected to Naples, it had a nobility of Guelph predominance  that supported the Angevins and Durazzo.

In 1558 it was invaded and sacked by pirates. The city was then equipped with defensive walls. In 1799 it joined the Neapolitan Republic and it was the scene of clashes between Bourbons and Republicans. Since the eighteenth century it was considered an exclusive and revered holiday destination. Its most illustrious fellow citizen was Torquato Tasso (1544-95).