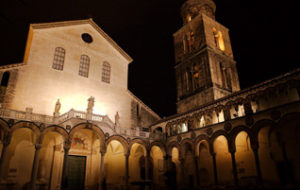 Salerno probably has Etruscan origins, as witnessed by an Etruscan-Campania necropolis found in the area of ​​Fratte.

The word Salernum comes from the union of Salum (sea) and Irno, which is the river that crosses the city. Its name appears in the history of Campania from 197 b.C.,  as a camp colony, born to counter the Picentini.
It was conquered in 476 by Odoacre, by Teodorico and in 541 by Totila.

Since 646 it had become part of the Duchy of Benevento and when the duchy split up, it became the capital of an independent principality.

The city achieved splendor and wealth with Guaimario V (1027-52). In 1076 the city was besieged by Roberto il Guiscardo and defended by Prince Gisulfo II.

Roberto was married to Sighelgaita, sister of Gisulfo. In the spring of 1077, when all the resources were used up, Gisulfo gave up his weapons after eighty days of siege in the Castello Arechi. Roberto elevated Salerno to the capital of his dominican title of duchy.

The maximum splendor came thanks to the fame of the Salernitan Medical School.
The city hosted Pope Gregory VII in exile.

The splendor of the Norman court made it the most important city of the kingdom on the continent after the capital Palermo. It was destroyed by the Emperor Henry VI in 1194 and recovered above all thanks to Giovanni da Procida and the construction of the port (Molo Manfredi).

The decline came in the Swabian-Angevin era. In 1419 it was given as a feud to the Colonna family, then to the Orsini family, to the Sanseverino family, and finally to the Grimaldi family.

In the resurgence it was also active for the Cilentani motions of 1828. From 1944 it was the seat of the royal government of Italy occupied by the Allies who had landed there in the previous month of September, on the plain of Pontecagnano.

The bombings prior to the landing caused great damage to the old town, and with the reconstruction of the city, the modern aspect of the neighborhoods facing the sea was accentuated.