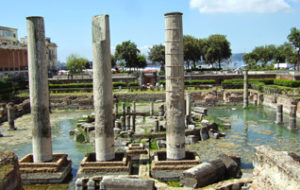 The city was founded under the name of Dikiarchia in 529 B.C. by exiles coming from Samos. It defended, together with Cuma, the fate of Hellenism in the west against the Etruscans, but fell under the sannites from 421 bC.

Due to the abundance of thermal waters the Romans established there a colony, naming it Puteoli.

For political, economic, commercial and military reasons, it became one of the most important ports in the Mediterranean.

A colony from Nero was created there in 63 AD. with the name of Colonia Claudia Neronensis Puteolana.

Vespasian himself gave it the name of Colonia Flavia Augusta Puteolana.

With the rise of the port of Ostia at the mouth of the Tiber river, the decline of Pozzuoli began.

It was connected by Emperor Domitian to the capital of the Empire through Via Appia in Rome and the “Domiziana” road (completed in 95 AD).

Christianity flourished there, so much so that on its landing at Pozzuoli, St. Paul already found a thriving Christian community there.

Plundered during the barbarian invasions by Alaric, Genseric and Totila between the 5th and 6th centuries, the population moved to Naples, abandoning the city.