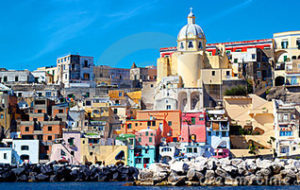 An integral part of the Campi Flegrei, together with Ischia and the Vivara islet.
It has a yellow tuff structure covered with gray tuff. The island is rich in lava flows.
Procida actually shared the same historical events of the island of Ischia until the 18th century.

The island had as feudatories the Da Procida, whose most famous exponents were above all Giovanni 1210-1298, the Cossa family, and finally the D’Avalos family.

It was occupied by the British in 1799 with the proclamation of the Parthenopean Republic in 1806-09, against Giuseppe Bonaparte, and in 1813 forcing Murat to join the coalition against Napoleon.

It is covered by dense vegetation and the population lives mainly on fishing and agriculture. In the Castle, there is an ancient penalty establishment. The island was celebrated in the book “Graziella” by the French poet Lamartine.