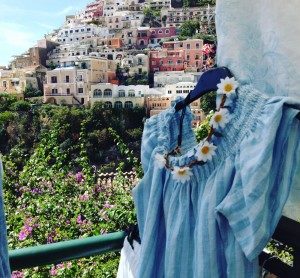 The numerous shops, set among the narrow streets, are an important attraction, sending to the world the style that is universally known as “Positano sea fashion”.

SITE: Positano, pearl of the Amalfi Coast
DURATION: Half day
Church of the Assumption
DISABLED ACCESSIBILITIES: Yes
OTHER COMPATIBLE ITINERARIES:
Amalfi, Ravello, Minori, Vietri sul Mare and Salerno Ancient and picturesque seaside village, from the sea it looks like a cascade of multicolored small houses sloping gently towards the sea.

Thanks to the mild climate and the beauty of its landscape, in past times Positano  was a holiday destination for noble and wealthy Roman families, as evidenced by the findings of a Roman maritime villa, under the church of Santa Maria Assunta. The fall of the Roman Empire gave way to a dark period of which little is known, at least until the ninth century, when Positano became part of the Republic of Amalfi, thus enjoying the advantages that the maritime business offered. With the Norman conquest, the Angevin and Aragonese domination went through periods of decadence, which lasted until 700.
Its tourist boom began after the Second World War, maintaining its character as an elite tourist center, unchanged over the years.

Not to be missed:
The Roman maritime villa
The Church of Santa Maria Assunta
Bring with you: water, sunscreen cream, camera and cell phone.