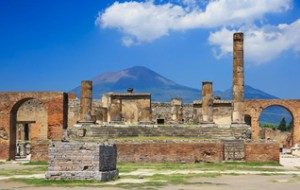 Have you ever wanted to go back in time to discover how the ancient Romans lived and be part of the customs and traditions of 2000 years ago?
If so, dive with us in this magnificent experience that will allow you to cross places which are rich in history.

On this tour you can find out about the daily life of ancient inhabitants of Pompeii, the places which were most loved and appreciated by them, their architecture, but also the condition of life of women and men, slaves and free men, patricians and plebeians, children and adults.

The city was founded by its inhabitants around the 7th century BC. Soon it became a Greek and then Etruscan city.

Conquered by the Samnites, it became an Italian city, with public and private buildings that reflected its architecture.

With the arrival of the Romans and the defeat of the Samnites, Pompei maintained its autonomy, its institutions and its own language.

Conditions changed with Annibal’s  wars and with the great social war waged by the Italics against Rome.

Pompeii fought for its independence. In 89 BC SIlla besieged and occupied the city that paid the rebellion with the loss of its freedom. Already from 80 a.C. it assumed the official name of Colony Venerea Cornelia Pompea.

The dictator Silla left his nephew Sulla the task to provide for the new planning of the city.
A large number of veterans had settled in the city and in the countryside, and reconciling the needs of the conquerors and the conquered people, was not an easy task.

The assimilation process was however rather rapid and Pompeii began to assume the typical characteristics of a Roman city.
Despite everything, there remained something of the old Italic spirit. In 59 AD, during a show at the amphitheater, a bloody fight broke out between Pompeiani and Nucerini present at the show. The Nucerini had the worst, were massacred and driven out.
Nerone himself reported the fact to the Senate that sanctioned the city with the closing of the amphitheater for ten years.
In 62 d.C. the city was hit and severely damaged by the earthquake.

Immediately the inhabitants hastened to rebuild it, restoring temples and public buildings but also the luxuriously rich private houses.
On 24th of August 79 AD, Vesuvius suddenly awoke.
The mountain, covered with vineyards and woods, lost its peaceful appearance with a large gash that opened in its summit.
Ashes and lapilli covered the sun and then fell to the ground, covering Pompeii for six meters in height.
Young Pliny , who in those days was in Miseno with his uncle admiral, gives us a description of the events of that eruption in two letters written to Tacitus.
Most of the inhabitants found their death along the coast and on the roads that led to Stabia and Nuceria.
The few remaining survivors died in a vain attempt to find shelter in the basement of their houses.
Even Pliny the Elder, naturalistic writer and Roman prefect, in a vain attempt to bring help to the fugitives and study the volcanic phenomenon closely, died suffocated by the vapors and the ashes that made the air unbreathable.
The life of the city was dramatically interrupted but not completely destroyed, and this allows us to have a precious document, a complete vision, which captures even the most intimate details of the public and private life of its inhabitants.