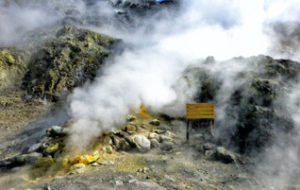 The Phlegraean Fields are a vast area of ​​volcanic origin where myth, history and nature blend together.

At about 10 kmfrom Naples there is the Solfatara, 33 hectares of extension, an area  showing significant phenomena of quiescent volcanic activity, including sulfur, arsenide, sources of carbon dioxide (mofete), mineral waters, mud volcanoes.
The crater has an elliptical shape, (770m x 580mt) and it belongs to the third eruptive period. The upper perimeter is 2.3 km, the bottom is 92 meters.
The walls are made of tuffs and trachitic masses.

The sulfatar phase of a volcano is characterized by fumaroles of water vapor containing sulfur, sulfides and arsienuri, typical of quiescent volcanoes, mofete (carbon dioxide emissions) and mud.
The crater was formed about 4000 years ago, and it remained intact from then.
In 1198, according to some scholars, an eruption occurred, but, much more likely, the normal fumarolic activity increased.
In the ’20s a series of perforations were carried out on the bottom of the crater, up to a maximum depth of 14 meters, ascertaining a layer of deep hardness.
The Romans of the Empire already knew the Solfatara. Strabo speaks of the Forum Vulcani, home of the god Vulcan, very popular for its sulphurous waters and hot stoves.
There was no traveller in the eighteenth and nineteenth centuries who did not enter it on his southbound journey .
The Solfatara officially opened to visitors, starting from 1900, and inside there was a thermal establishment with mud, sulphurous waters, steam baths.
In addition, alum, sulfur and bianchetto were extracted there.