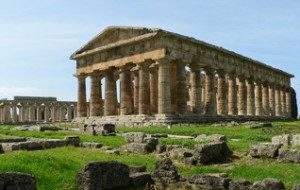 SITE: The best preserved temples of the whole Magna Graecia
DURATION: 2 hours
DISABLED ACCESSIBILITY: Yes
ENTRANCE: € 9.00
COMPATIBLE ITINERARIES: Salerno, Velia, Padula Charterhouse
The visit includes:
the archaeological area with the temples of Ceres, Poseidon and the so-called Basilica.
The archaeological museum with the famous Tomb of the Tombs and the metopes of the Sele heraion.

A bit of history
Twenty centuries before the arrival of the Greeks, the plain where now Paestum stands was already inhabited.
All this is witnessed by the finding of the Necropolis of Gaudo, discovered by the American landing troops on September the 9th, 1943.

Those same troops, thus showing extreme sensitivity, gathered all the findings, the funeral ornaments and skeletons, handling them over to the Archaeological Superintendence of Salerno.
The study of the bone remains made it possible to hypothesize that in that area lived a population of “brachycefali” who grew higher than all the neo and eneolithic populations of southern Italy, probably emigrated there from Asia Minor between 2400 and 1900 BC.
From 1000 A.C. onwards, entire families coming from Greece flocked to the west in search of fertile and free lands.

Thus a series of colonies, which were independent from the Motherland, but still retaining a strong spiritual bond to the land of origin, were born.
Around 600 a.C. the Doric minority of Sybaris would be driven away by the Achea majority reaching by ship the mouth of the river Sele.

On that very spot they immediately built a temple entitled to the goddess Hera Argiva, the mother goddess of love and fruitfulness.
The goddess was represented seated on a throne with a child in her left arm and a basket of pomegranates in the other.

The temple was supported by limestone columns with Doric capitals.

In the ancient world it was considered a real point of reference for sailors who stopped there to honor the goddess, finding refuge there while travelling on the South / North / South commercial routes.
After consolidating the cult of the goddess, the population chose to move further south and they left the mouth of the Sele river.

Poseidonia was therefore a city in full commercial and economic expansion.
In the year 410 a. C, the wealth of the Greeks eventually attracted the Lucani, a population of the hinterland.
In 332 a. C. Alexander the Molossus, king of Epirus, succeeded in uniting the Greek colonies of Southern Italy who were allied with the Lucanians, so the battle took place in Poseidonia.
With Alexander’s death, the city returned to Lucan hands.
In 273 a. C. the Romans drove out the Lucanians, subsequently they found an agreement with the city: Posidonia undertook to provide ships and sailors for the fleet in Rome if necessary, gaining in return protection and wealth.
The Romans paved the streets, built the Baths and the Amphitheater, renovated the houses, and gave a forum to the city, that from that moment on was called Paestum.

In 27 BC the city enjoyed a good alliance with Rome, which in the meantime became the Republic of the Empire.
The need to connect the provinces with the capital led to the construction of the Via Appia, but this was also a mortal blow to Paestum, cut off from trade routes.
Entire households left the city to look elsewhere to preserve their hardly gained prosperity. In little more than a decade the city was depopulated, but the end came in the years between 10 a.C. and 10 d.C. with malaria caused by the overflow of the Salso river that flew through the city.
Then Constantine’s Edict, which from 313 declared complete freedom of worship, and therefore the spread of Christianity, completely changed Paestum’s situation.

The temples of Paestum were abandoned.
Already in the 800’s the face of Paestum was very much altered, kept alive by a few willing volunteers, while the scourge of piracy was always threatening the archaeological site.
After a whole millennium of history, the memory of Paestum was also lost.

The shepherds who brought their flocks to pasture, while seeing the temples, did not understand their importance.
The rediscovery took place in 1750, under the reign of Charles of Bourbon, when the first carriages of scholars, including Winkelmann and Goethe (1787) passed through here.
The temples were cleaned inside and brought back to the splendor of the past.

Only after the war, a real archaeological excavation was carried out, and the site was rearranged on the occasion of the visit.