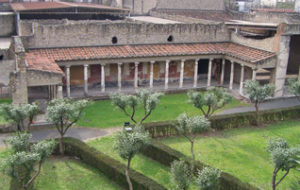 Inside the Vienna National Library there is a medieval copy of a Roman road map of the Imperial age (3rd century AD), consisting of a parchment of 6.8 meters x 0.30 meters where the earth was represented from the river Ganges to the Atlantic.

This paper is called “Peuntigeriana”, by the name of Corrado Peuntinger (1465-1547), an archaeologist, a Bavarian humanist, who had discovered it.

The map is in color and the distances are calculated in miles. On this map, with a distance of three miles from Pompeii, there is reported a center called Oplontis. If we consider that the Roman mile corresponded to 1480 mt ca, the ancient city occupied the territory of today’s Torre Annunziata.

The name Oplontis in the card is highlighted more than the others. The name Oplontis could derive from Oplon in Greek gomena, so probably the city was the port of Pompeii, or from “opulus” from the Latin, the most commonly used tree to support the vine.

Or perhaps it derives from “opulentia”, for the sumptuousness of the villas that once stood there. The findings made on the spot, however, have not brought to light an urban center, it is therefore assumed that it iwas a residential area of ​​Pompeii, a holiday place for the rich, who  were eager to get away from the noise and the hustle of the city.
The first discoveries date back to the end of the sixteenth century and show magnificent hidden treasures. Only in the Bourbon age there was a more systematic search for paintings, mosaics and precious furnishings to enrich the king’s private collections.

During the Vesuvian eruption of 79 AD, Oplontis followed the fate of Pompeii and Herculaneum.
From the testimonies of Pliny the Younger, during the eruption, several rains of ash and lapilli poured between Pompeii and Stabia, creating layers of different thickness, reaching 7 meters in height. Oplontis, however, was also invaded by some muddy material. Therefore, apart from the four layers of lapilli, three layers of ash alternated up to two meters; there followed a layer of 5 meters of solidified mud, above which there was deposited a blanket of humus which was1.5 meters high. The excavations have brought to light a suburban building of great dimensions that for the wall decorations and structure can be considered the most important of the Vesuvian area.
These suburban dwellings usually arose along the great roads of communication. They had a residential purpose and at the same time assured a good agricultural production. Only one part of the house was destined for the owner’s home, the rest was divided between the dwelling of the farmer and the agricultural production. The villas stood isolated, but in extraordinary cases dictated by the favorable climate, the beautiful landscape or the presence of thermal springs, they could also be grouped together.