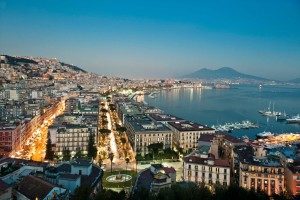 Welcome to Naples! The city, located in the homonymous gulf dominated by Vesuvius, with about 1 million inhabitants, is the third Italian city by population. Capital of the Campania region, it is famous all over the world for its artistic and naturalistic beauties, for its historical past and for the liveliness of its inhabitants. its rich artistic and architectural heritage was declared a UNESCO World Heritage Site in 1995, together with the entire historical center (the largest in Europe).

DURATION You can customize the route according to specific needs in terms of time and monuments that you would like to visit.
ACCESSIBILITY Route for everyone.
EXPECTED INPUTS Any entrance tickets are to be paid by the participants.
COMPATIBILITY WITH OTHER SITES It is possible to integrate the visit itinerary with: National Archaeological Museum; Monumental Naples; Royal Palace; Diocesan Museum; Museum of Capodimonte; Certosa di San Martino; Naples overview.
DIFFICULTY LEVEL Low.
PET FRIENDLY Yes.

Founded by the Greeks in the 8th century B.C. with the name of Parthenope, the 4th-century Neapolis will later become a place of leisure, culture and religion with the Romans following the principles of the Epicurean philosophy.

With the fall of the Western Roman Empire, it became an autonomous duchy and then capital of the Kingdom of Naples with Roger the Norman.

Thus began its long history as the capital of an autonomous kingdom that included all of southern Italy, from Abruzzo to Sicily, which will end only in 1861 with the proclamation of the unity of Italy.

Its cultural independence, with the foundation of the first secular and public university of Europe, its military academies, the Neapolitan language itself, the uniqueness of its folklore have always distinguished the city over the centuries.
Not to be missed:
• Old Town
• Archaeological Museum
• Museum of Capodimonte
• Royal Palace
• Monumental Naples
• Panoramic Naples
• Naples from above – Certosa di San Martino
• Art stations
• Diocesan Museum

The historic center of Naples, part of UNESCO heritage since 1995, is the largest in Europe.

Visiting the historic center of Naples means going through twenty centuries of history, a treasure trove of exceptional artistic treasures. The visit will include the sacred buildings and the most important squares: the Duomo, with the treasure chapel of San Gennaro and the Basilica of Santa Restituta; piazza San Gaetano with its churches (San Lorenzo and San Paolo Maggiore) and the nearby via San Gregorio Armeno, one of the most characteristic of Naples, with the famous artisan shops of the nativity scene; via dei Tribunali (the maximum decumanus of ancient Neapolis), still today the beating heart of the city, on which the most famous pizzerias greet the tourists; the Sansevero Chapel, with the extraordinary sculpture of the veiled Christ; the monuments of Spaccanapoli with Piazza San Domenico and Piazza del Gesù; the church of Santa Chiara, with its monumental majolica cloister.

All this without forgetting to taste the typical delicacies of Neapolitan pastry shops!

A visit between art and history and many curiosities and legends that only a city like Naples can offer its visitors!