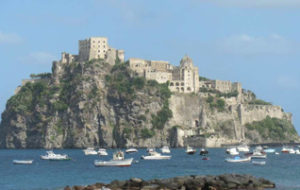 Ischia is the largest of the Flegrean islands, located on the western side of the Gulf of Naples.
The island is made up of volcanic rocks and its main nucleus is Mount Epomeo (788 mt s.l.m.).
It was colonized in antiquity by the Greeks of the island of Euboea, who called it Pithecusa, the island of the apes, or of the evil Cercopi, mythical inhabitants of the volcanic lands.
According to Pliny instead, the name derives from the flourishing industry of clay pots or from the cult of the god Apollo Pizio.
In Roman times the name Aenaria was imposed, perhaps because of the flourishing vineyards. The current name appears in a letter from Pope Leo III to Charlemagne in 813.
It was occupied in 474 a. C. from Gerone of Syracuse, who established a military garrison building a castrum, a castle, that in the Middle Ages was still called the Castle of Gerone.
The island was occupied by  Neapolitans, and then by  Romans in 322 a. C.
In 6 d. C. Augusto returned it to Neapolitans, in exchange for Capri.

It suffered Barbarian invasions, the dominion of the Heruli, the Ostrogoths and the Greeks. Under the rule of an independent duke, it was devastated by Saracens, and occupied by Normans.
It then met the Angevin and Aragonese dominion.

In 1302, due to the last eruption, the population took refuge in Baia and returned only after four years.
The Angevin-Durazzesca feud theater was later donated by Giovanna II to her adopted son Alfonso d’Aragona. In 1438 the king chased all the male inhabitants from the island and called a colony of Catalans to whom he married the wives and daughters of the expelled inhabitants.
He opened a more convenient access point to the castle through a bridge that linked it to the island, digging a tunnel in the rock.

In 1442 he gave the island to his favorite mistress Lucrezia d’Alagno. After controversial events, the castle returned to the hands of the Aragonese crown, who entrusted it to Innico d’Avalos, beginning a lordship that lasted until the 18th century.
The illustrious exponents of this family were: Alfonse, victorious winner of Khair-ad-din and Vittoria Colonna, poet and wife of Ferrante d’Avalos.

During the 16th century the island suffered raids by the pirates, but the raids became rarer and the inhabitants began to build the center of Ischia.
In 1729, when the Avalos dynasty was extinguished, the island became a university city  under the control of the state property. In 1734 it was conquered by the Bourbons. I

In 1799 the islanders praised freedom and then returned to royal government.
In 1806 the French occupied the island and resisted the attacks of the British, but they devastated it.
Since then it  followed the fate of the Kingdom of Naples.