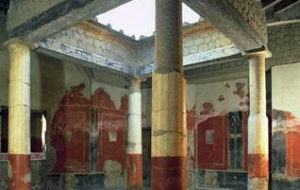 According to legend, the city was founded by Hercules on his return from Iberia.
It was of Greek origin and name. Its urban layout, in fact, recalls that of Neapolis for its “Decumani” and “Cardi”.

Since the VI century BC, Herculaneum had been under the dominion of the cities of Cumae and Naples, later under that of the Samnites.
After having taken part in the revolt against Rome, it was occupied by a legate of Silla in 89 BC., welcoming a colony of veterans and losing all autonomy.

Only a few parietal inscriptions in the Oscan dialect suggest the Samnite period, while various Roman inscriptions testify to the presence of a college of augustals and a rich patriciate.

The earthquake of 62 d.C. damaged public and private buildings. The reconstruction was not yet complete when the city was overwhelmed and buried by the eruption of Vesuvius in 79 AD.

An unformed mass of eruptive material descended along the slopes of the mountain, like an immense stream. Muddy lava, due to its liquid consistency, occupied every space and, solidifying, became a tufoid rock bank, unequal in strength and composition, compact from 12 to 25 meters of height.

Although the current town was built in the same area, the memory of Herculaneum had not been lost in time.

In 1709, the Austrian prince of Elboeuf, cavalry general of the Kingdom of Naples, had a well dug in the grounds of one of his mansions, and he ran into the wall of the theater scene.

With wells and corridors dug into the tufa bench, he explored the scene and the theater orchestra by removing what was precious to him.

In 1738, by order of King Charles of Bourbon, regular excavations began. The excavations followed the same technique of the excavations of td’Elboeuf under the direction of the Spanish military engineer Alcubierre. The excavators were local craftsmen called the “cavamonti”. With the exploration of the magnificent Villa dei Papiri (1750-65), the precious treasure of bronze sculptures and the papyrus library were brought to light.

In 1755 the Royal Herculaneum Academy was founded, which published eight volumes concerning the paintings, bronzes and papyri found in the excavations.

From 1828 the excavations were still carried out, finally adopting the method of discovery, bringing to light part of two blocks.

The excavations also continued with the Savoy. Only from 1927, with Amedeo Maiuri, the excavations became systematic and regular, bringing to light a good part of the city.