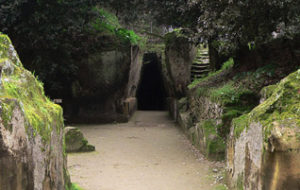 Cuma was probably founded in 1050 BC. from Kyme wind power. The Greeks, the Calcidesi from the island of Euboea, after having colonized the island of Ischia, moved on to the coast, meeting there a group of indigenous people of the Iron Age with whom they already had commercial relations.

Between the seventh and sixth centuries BC, the domain of Cuma extended to the whole Phlegrean territory.
The Cumaean power worried the Italic colonies that joined the Etruscans to attack it.

The Cumans defeated their opponents in 474 BC under the guidance of Gerone of Syracuse, definitively driving the Etruscans away from Campania.

Half a century later, the Samnites occupied the Cumaean territories becoming the true masters of Campania.

With the submission to Rome, the city had the “civitas sine suffragio” and from 180 AD. the Cumans began to use Latin as their official language.
With the rise of the Empire, the city was left out of the urban riots that interested Puteoli instead, becoming thus semi-deserted.

With the advent of Christianity, Cuma saw its temples transformed into Christian basilicas. In the 6th century it was the scene of clashes between Goths and Byzantines, and in the 10th century it was devastated by the Saracens, becoming a refuge for pirates and marauders.

For this reason, it was set on fire by the Neapolitans.

The first archaeological findings date back from the beginning of the seventeenth century, but the first systematic excavations date back to 1852-57.

Between 1924 and 1932, it was excavated at the level of the acropolis, and the cave of the Sibilla was discovered.