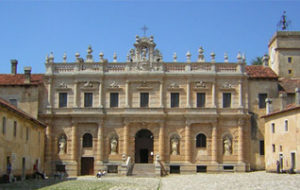 The “Certosa di San Lorenzo” in Padula is one of the most magnificent monuments in Southern Italy.
It covers an area of 51,500 square meters, and it was built at the bequest of Tommaso Sanseverino, Count of Marsico, in 1306.
In various documents of the time, we may find reference about the generous hospitality that its monks offered to travellers and pilgrims.In
1535, Charles V dined there,and, according to tradition, the monks prepared for him and his attendants, an omelette made with 1000 eggs.

The Charterhouse was suppressed by the French government, that made of it a guest house for as many as 20,000 soldiers. However, the definitive suppression took place  only from 1886.
During the two world wars it was used as a concentration camp.

The building was built in the form of a gridiron, in honor of the martyrdom of San Lorenzo. The handle is represented by the two arms that close around the atrium. The monks’ cells represent the irons of the grating and the large, semicircular jutting staircase symbolizes instead the cup for the “untume”.