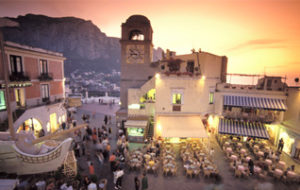 The island was inhabited since Paleolithic. At that time, it was probably only an extension of the Sorrento Peninsula. The origins of the name, which could derive from Caprea (island of sour stones), or from Caprae, are uncertain, since in ancient times the island hosted many goats, or, more likely, from Capros, which means a boar in ancient Greek.

Some ancient writers narrate that Capri was conquered by the Teleboi, but it is certain that the island soon became Greek in costumes and language.

On the spot there was an Efebeo (a place of education for young people) rather famous for the time.

Starting from 326 a.C. the island belonged to Naples.

The emperor Augustus landed there in 29 BC, and he was greeted by a positive omen.

A dry holm-oak flourished in his presence. This is why he took the island in exchange from the Neapolitans, giving the island of Ischia in return.

The emperor greatly loved the place, and he stayed there many times.

His last visit occurred in 14 AD. just before his death. The misanthrope Tiberio also settled there, starting from 26 AD, at the age of 67, spending on the island the last ten years of his life (he died in Miseno).

The voluntary exile of Tiberius on the island gave rise to stories and legends about the cruelty and debauchery of the emperor, told by Tacitus and Suetonius, excessively exaggerated by popular imagination.

Twelve villas were built in Capri, probably in that same period,  and they were entitled to the most important deities of the time.

The most beautiful of them still remains Villa Jovis, built on the heights of Mount Tiberio, also known as the hill of Santa Maria del Soccorso.

After Tiberius’ death, the island was gradually forgotten. In 182 AD, Emperor Commodus relocated his sister Lucilla and his wife Crispina. Troubled by earthquakes and devastated by vandals, it had to undergo Saracen raids and submission to the Duchy of Naples.

In 866, the emperor Lodovico II donated it to the Duchy of Amalfi. The retreat of the Caprese people to the hills dates back to this same period, abandoning the Navy for defense reasons.

Later the island was taken by Lombard prince Guaimario IV, then passed under the Normans with Roberto the Guiscardo. It was defended by Aragonese attacks, remaining still an Angevin possession.
In ‘300, Giacomo Arcucci, minister of Giovanna I d’Angiò, founded a monastery dedicated to St. James (1371-74). In 1496 it was Frederick II of Aragon to equal the conditions of Anacapri to those of Capri in terms of concessions and privileges, eliminating the disagreements that had always divided the two centers.

In the 16th century, pirate raids were resumed, and in 1535 Kahir-ad-din, called “The Barbarossa”, attacked and destroyed the castle of Anacapri, while the corsair Dragut sacked and burned the Charterhouse in 1553.
New wealth and prosperity on the island came with the Bourbons. Ferdinand IV often visited it for quail hunting.

In 1806, the French entered Naples, and they also settled in Capri.
In the same year a British flotilla of 300 men landed on the island, overpowering the French.

With Gioacchino Murat, on October the 4th, 1808, after fake attacks on the east side of the island, the French, who were about 2000 men, managed to land on the west coast, forcing the British to surrender.

From 1809 the island was annexed to the Province of Naples.
The tourist fame of the island began with the revelation of the Blue Grotta in 1826 that made Capri a destination for international tourism, inspiring the German poet August von Platen to create the idyll “The fisherman of Capri”.

From that moment on artists, poets and German writers, exiles and Russian writers (Gorki) found there a place to stay and a source of inspiration.
Also the Swedish doctor Axel Munthe here wrote the book “The Story of Saint Michael”.