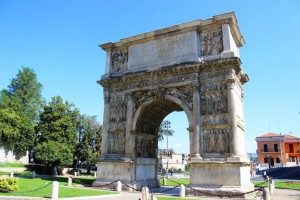 Capital of the Sannio, land of history and deeply rooted traditions, indomitable and proud as its ancient inhabitants, Benevento is a fascinating city that arouses wonder and admiration for the richness of its archaeological heritage, for the nobility of its buildings, for the beauty of the its churches.

Visiting its most famous monuments, but also just walking through the alleys and squares of its historical center, you can see the amount of historical events affecting Benevento over the centuries.

The news handed down from the official sources go alongside with popular legends and ancient anecdotes, earning the city the reputation of “city of witches”.
The “Rocca dei Rettori”, a dwelling-fortress, recalls the eight centuries of papal domination in Benevento.

Inside it, you can find the exhibition called “Excellent men”, from its towers you can enjoy in its entirety the famous” Sleeper of the Sannio “,the chain of hills that takes the form of a woman lying on her side.

The church of Santa Sofia (VIII century AD) is a unique jewel of Longobard art, universally recognized as a piece of the Unesco heritage.
What strikes the visitor is the originality of its architectural plan, half stellar and half circular. the constant play of lights and shadows, the alternation of pillars and bare columns, which create a perspective effect from any side you watch.

The convent is part of the Sofiano complex, with its beautiful Romanesque cloister, home of the Museo del Sannio, an extraordinary collection of archeology and art remnants of the entire province.

The Arch of Trajan, a majestic triumphal arch, is the symbol of Benevento.

This is a testimony of the ancient splendor of the city at the time of Roman domination, and also entrance to the homonymous street, the Via Traiana, which reached as far as Brindisi.

Recommended: multimedia projection “I Racconti dell’Arco” (Tales of the arch)
The Duomo (recommended: hypogeal visit)
Founded in the Lombard period (7th century) and then completely rebuilt in the 9th and 12th centuries, it was almost completely destroyed by the bombings of the Second World War.

Of the ancient monument, we have as only remnants the crypt, the Romanesque façade, the bell tower and its Bronze Gate (century XIII) a splendid rarity.

In the heart of the Triggio quarter, the so-called “Civitas Nova dei Longobardi,” stands the Roman Theater (2nd century AD), a social and cultural meeting place of the city during Roman domination, which was attended by lovers of comedies and tragedies.

By the way, Benevento is also contemporary art: the Hortus Conclusus is the permanent installation of some works of the Sannit artist mimmo Paladino, the greatest exponent of the artistic school called “Transavanguardia”, in the suggestive cloister of the ancient Dominican convent .