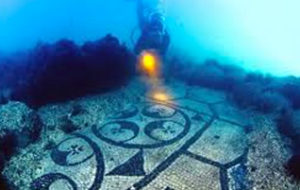 According to a legend, the city took its name from Baios, one of the companions of Ulysses, buried there and honored by his fellowmen.
In truth, the city had always been known for its thermal springs, which sprang from the coast and the surrounding hills. According to Livio, the Roman consul Gneo Cornelio Scipione went there to treat arthritis.

The territory of Baia, a spa and very much sought after seaside resort, was soon populated with sumptuous villas of rich Romans. Orazio describes the Bay of Baia as the most beautiful in the world.

Among the others, the following important Romans had villas in Baia: Pompeo Varrone, Crasso, Cesare, Cicero, and many others.

After the social war it became an imperial residence, taking on an even more luxurious appearance.

Eruptive phenomena and bradyseism caused most of the monuments in Baia to disappear at the bottom of the sea.

Therapeutic spa has continued up until today.