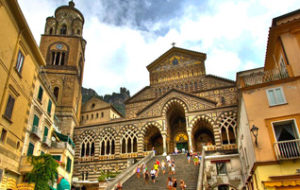 Situated at the mouth of “Valle Dei Mulini”, the historical soul of the Amalfi Coast overlooks the sea.
The city was founded by a group of Roman noblemen who,being on their way to Constantinople, were shipwrecked on the Apulian coasts; first the castaways founded Melphi (hence called “melphitani”), and later on they went as far as reaching a safer place, along the coasts of Salerno, from which Amalfi took its origin.

With the conquest of Italy by the Byzantines, Amalfi became part of the Byzantine Duchy of Naples until the first part of the ninth century, finally breaking away from it in September 839, thus establishing itself as the first Maritime Republic of Italy.

From that moment on, Amalfi became an autonomous and powerful city-state, dominating international trade, thanks to its commercial relationships with the Arabic and Byzantinian world.

Among the greatest proofs of its greatness, there were the Tavole Amalfitane, a code collecting rules of maritime law that remained current throughout the Middle Ages.

The decadence of Amalfi began with the annexation of the city to the Norman Kingdom, the devastating floods that destroyed the ports and the naval fleet and, in the end, the looting in 1137 by the Pisans. Thus ended the Republic, but Amalfi still remained an important commercial reality.

Not to be missed:
The Cathedral of Sant’Andrea
The Cloister of Paradise
The Arsenals of the Republic: Museum of the Compass and the Duchy of Marinaro
The Paper Museum
The Valley of Ironworks natural reserve

The valley of ironworks
Hidden in the green soul of the Amalfi Coast, the valley is a place of fascinating beauty and of great interest for the whole community, also protected by UNESCO.
The wide valley, belonging to the municipality of Scala, joins the valley of the Mills with that of the Ironworks, and it borders the territories of Amalfi and Agerola.
A magical place, to say the least, where, guided by the noise of its waterfalls and streams, you can reach the Reserve, an extraordinary and unique example of biodiversity where the humid sea breezes have created a sub-tropical microclimate, ideal habitat of very rare species, both animals and plants.

The symbol of the valley is in fact the giant fern dating back to the tertiary era, the so-called “Woodwardia radicans”, that, together with other plants, such as the Pteris or the small carnivorous plant (La Pinguicola Hirtiflora) makes this place extraordinarily unique.

If you are lucky enough, you can meet the Salamandrina Terdigitata, the spectacled salamander.
In short, the whole tour is an invitation to completely forget about the traffic and chaos of the Amalfi Coast.

The itinerary
Along the route, which starts from Pontone (village of the municipality of Scala), you can see what remains of the ancient ironworks of the Amalfi Republic, which gave their name to the valley.
Leaving therefore the inhabited village of Pontone, visitors can continue their walk towards the valley, where, driven by the noise of the water, they  can easily reach the torrent Canneto.

After the latter, you may continue uphill, until you reach the Reserve: once you have admired the fern and enjoyed this corner of incomparable beauty, you can go back and continue towards the valley itself, that from that place takes the name of Valle dei Mulini (Valley of Mills).

Here you can admire the ancient factory buildings of the paper mills that produced the precious Amalfi paper.
Walking southwards, the gaze is suddenly captured by the view of the sea and by the charming terraces where the yellow of lemons warns us that we are slowly reaching the city center of Amalfi.
With the imposing façade of the Cathedral of Amalfi, we reach the final destination of our journey, a journey that tells about millennia of history and local culture.

The whole place invites us to silence and contemplation, to respect and preservation of a wonderful natural environment.

Length: Pontoon -Amalfi
Duration: about 4 hours
Difficulty: medium – recommended for children aged 6 and up
We recommend comfortable clothing: sports shoes or trekking shoes, hat, and sunglasses
Take with you: water, dried fruit or some snack, sunscreen, camera and mobile phone.